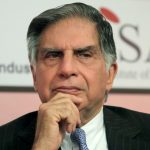 Ratan Naval Tata GBE(born 28 December 1937) is an Indian businessman, investor, philanthropist and chairman emeritus of Tata Sons. He was the chairman of Tata Group, a Mumbai-based global business conglomerate from 1991 till December 28, 2012 and continues to head its charitable trusts. He was also chairman of the major Tata companies, including Tata Motors, Tata Steel, Tata Consultancy Services, Tata Power, Tata Global Beverages, Tata Chemicals, Indian Hotels and Tata Teleservices. During his tenure, the group’s revenues grew manifold, totaling over $100 billion in 2011-12.

Mr. Tata is also associated with various organizations in India and overseas. He is the chairman of two of the largest private-sector-promoted philanthropic trusts in India. He is a member of the Indian Prime Minister’s Council on Trade and Industry. He is the president of the Court of the Indian Institute of Science and chairman of the Council of Management of the Tata Institute of Fundamental Research. He also serves on the board of trustees of Cornell University and the University of Southern California. Mr. Tata serves on the board of directors of Alcoa, and is also on the international advisory boards of Mitsubishi Corporation, JP Morgan Chase, Rolls-Royce, Temasek Holdings and the Monetary Authority of Singapore.