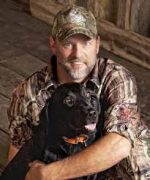 Toxey Daniel Haas III (born January 21, 1960) is an American entrepreneur and conservationist. In 1986, he founded Haas Outdoors, Inc. where he currently serves as CEO. Haas has been recognized and awarded in the outdoor community for his efforts in both business and conservation.

Haas had always been enthused by the outdoors. An avid hunter and fisherman, he had an idea to improve the conventional camouflage that everyone used. Haas gained inspiration from leaves, twigs, and dirt and pursued his first camouflage pattern. After being turned down many times searching for someone to print his pattern, Crystal Springs Print Works in Georgia agreed to give him a chance. However, they had a 10,000 yard minimum, and he could only afford 800 yards.Haas convinced them to make an exception, and his first pattern ‘’Bottomland’’ was printed.

Haas officially left his job at Bryan for his entrepreneurial pursuits and enlisted the help of his friend Bill Sugg as his partner. In 1986, Toxey Haas founded Mossy Oak Brand Camouflage and its parent company Haas Outdoors, Inc.

After the company’s inception, Bob Dixon, Ronnie “Cuz” Strickland, Carsie Young, and Cindy Cliett joined as the next employees. The first Mossy Oak clothing was sewn by Haas’ mother in his childhood home. Dixon, Strickland, Sugg, and Haas hit the road with the first Bottomland pattern, and Mossy Oak started to gain momentum. Mossy Oak gave Haas the path he needed to build an outdoor empire for the hunting and fishing community. Mossy Oak has grown to feature nearly twenty patterns and is one of the most recognizable outdoor brands in the country.

Mossy Oak allowed Haas to expand his business into other facets of the outdoor world.

Founded in 2007, Nativ Nurseries is headquartered in West Point and grows and sells trees for landowners.