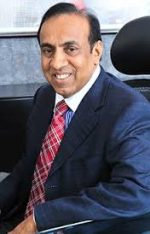 B. Ravi Pillai (born 2 September 1953) is an Indian entrepreneur and the head of RP Group of companies. A recipient of the 2008 Pravasi Bharatiya Samman,Pillai was honored again by the Government of India, in 2010, with the fourth highest Indian civilian award of Padma Shri.

During his time at Cochin University, he launched his first business, a chit fund in Kollam on reportedly borrowed money. Later, he started engineering contract business and worked for some of the major industrial houses in Kerala such as Fertilisers and Chemicals Travancore Limited, Hindustan Newsprint Limited, and Cochin Refineries. However, a labour strike forced him to close down his business after which he went to Saudi Arabia in 1978 where he started a small trading business. Two years later, he moved to construction business and established Nasser Al Hajri Corporation with 150 employees, which has over the years grown to become the flagship company of his business group, R. P Group, which is known to employ over 70,000 employees across its businesses.The shopping mall in South Kerala, RP Mall at Kollam city is owned by Ravi Pillai.

Pillai has expanded his business to other countries such as United Arab Emirates, Qatar, Bahrain and India and has interests in construction, hospitality, steel, cement, and oil and gas industries. RP Group is known to hold stakes in hotels such as Leela Kovalam, Hotel Raviz, Kollam, and WelcomHotel Raviz Kadavu,Kozhikode in his home state of Kerala. He is also involved in health care business through Upasana Hospital and Research Centre, a 300 bed multispecialty hospital in Kollam.

Forbes listed him, in 2014, in the The World’s Billionaires at 988 in the world and 30 in India. Arabian Business ranked him as the fourth most powerful Indian in the Middle East in 2014.

Recently, Ravi Pillai conducted his daughter’s Dr. Arthi wedding in Kollam on Nov 26 2015, with total expense of US$ 9Million. The wedding was organized by the production designer who lent his capabilities to the blockbuster film, Bahubali. This was supposed to be one of the most expensive wedding that happened in Ashramom grounds in Kollam, Kerala.