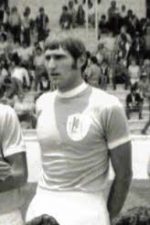 Yochanan Vollach ( born May 14, 1945) is a former Israeli footballer. He was a member of the Israeli national team that competed at the 1970 FIFA World Cup. Vollach is president of the Maccabi Haifa sport organization as well as being the CEO of The Chamber of Shipping of Israel.

Born in Kiryat Bialik, Vollach began his career with his local club, Maccabi Kiryat Bialik. In 1963, he was drafted to the IDF’s Nahal as an infantry soldier. One of only a handful of professional footballers to serve in active combat in the Nahal, Vollach actually missed an entire season of football while serving his country. During his service, he won the IDF football championship in 1965 . Still quite anonymous, Vollach yearned for a move to a bigger club. By 1965, at age 19, his rights were sold for 5,000 Israeli lira to Hapoel Haifa, the place where he would kick start his career and become a role model and a symbol for thousands of supporters until this very day.

Originally a striker, because of his height advantage and large build, he was dubbed “The Tank”. He was unable to reach his full potential so he was moved to the defender position where he excelled and played til the end of his career. He subsequently won the Israeli State Cup competition twice in 1966 and 1974, and was close several times to winning Liga Leumit (then the top division). His most major achievement though, was helping the Israel national team qualify for their first World Cup in Mexico in 1970. At the 1970 world cup, Vollach played against Uruguay. At the following match, Vollach broke his leg in the second half in a tough and brutal match from the Swedish (1–1) side, and so the dream of man marking Gigi Riva and Gianni Rivera, in the last match against Italy was over. Because of his performances on the national stage, Vollach was twice loaned out to other Israeli clubs to strengthen their rosters for the sole purpose of UI Cup games. The first time was in 1976 with Hapoel Be’er Sheva and the second in 1977 with Maccabi Tel Aviv, both Israeli title holders. Over the years, Vollach managed to keep his position as one of the biggest sports stars in Israel.

He began working at Zim in 1970 after returning from the 1970 FIFA World Cup. At his first week he was assigned to go over employee’s attendance tickets. In 1977, Vollach transferred from Hapoel Haifa, along with former international player and club captain Yitzhak Englander, to local city rivals Maccabi Haifa.

As a seasoned veteran, Vollach served as a role model for young and inexperienced players at Maccabi. He was looked up to for having been a part of the national side that took part in the World Cup finals. His time though at Maccabi was short, playing only two seasons and, in 1979, he retired from professional football and began, fully voluntarily, to act as general manager of Maccabi Haifa. Vollach’s unique managing skills and leadership was the major reason that Maccabi went from being a mediocre football club to a successful empire in the top flight, winning their first championship in 1984 and retaining it in 1985, which Maccabi Haifa also finished at the head of the house in the Intertoto home stage.
During this time, he began to be known as “the brains of Maccabi Haifa”.
During the years, Vollach concisely insisted of combining Maccabi’s youth players in the senior Squad and also prevented the release of many key players as well as bringing the youth side to its zenith.

In 1985, Vollach was promoted in his job at Zim, and was sent oversees to become the branch manager and representative of the company’s operations in Hong Kong. It was then that he made a return to football, starring at Hong Kong FC.

Back to administrative Career:

After 5 years in Hong Kong, at 1990, Vollach returned to Israel, where former teammate and club captain, Yitzhak Englander was president of Hapoel Haifa. Englander offered him the position of president of Hapoel, but city rivals, Maccabi, were not eager to see Vollach go, so they appointed him as CFO and chief executive of the team. Over the span of three years (1990–1993), the club won the “double” (league and cup) during the 1990/91 season and the State Cup at 1993 . Between 1990–1994, he was volunteering in the management division of the Israeli Football Association as well as acting as Maccabi Haifa’s representative at the IFA.

After the football department was privatized, Vollach joined the Maccabi Haifa union’s management, filling major positions such as CFO and second to the chairman of board. In 1999, he was voted in unanimously as chairman of the board of the Maccabi Haifa union as well as president of the basketball division of Maccabi Haifa and as a member of the management of the Israeli Basketball Association. Aside from his administrative and work roles, Vollach participated for many years as a sports commentator on the popular Israeli sports radio show, Shirim uSha’arim (Hebrew: שירים ושערים‎‎, lit. Songs and Goals) and was a local journalist.

Vollach owns a Bachelor’s degree in History & Political science from the University of Haifa, and a Master’s degree in business administration from the Hebrew University of Jerusalem. He is also a retired Major in the IDF. Among the positions that Vollach filled during his time working for Zim, he has been the global services manager, chairman of the directorate of all Zim’s ownership companies and vice president of Zim, and Zim’s M.Dizengoff president & CEO. Since 2005, he has been the president & CEO of Newlog, which is a subsidiary of the Zim group, and handles logistic service relating to marine and overland transportation. He still plays football today for Hapoel Haifa’s veteran side, which he also trains. Vollach is a member of the Education and Publicity Committee of the IFA and a management member of Maccbi.

In recognition of his extensive volunteering to the sporting community as well as business success, he was bestowed with honorary citizenship by the city of Haifa, in 1993.