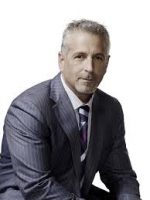 Tony Aquila (born October 1966) is an American businessman. He is the founder, chairman and CEO of Solera Holdings, a technology company that provides risk and asset management software and services to the automotive industry, as well as the global property and casualty insurance industry. In 2013, Aquila received the Ernst & Young’s 2013 Entrepreneur of the Year award in the Technology category, the same year in which Aquila was recognized as the highest-paid chief executive in the Dallas-Fort Worth area. Prior to founding Solera, Aquila served in executive positions with Mitchell International, Inc., Ensera, Inc. and MaxMeyer.”

Aquila was born in Richmond, California to an immigrant and military family. After dropping out of high school, Aquila worked at his uncle’s body shop sweeping floors and replacing windshields, and later joined the United States Army.

Since founding the company in 2005, Aquila has served as the chairman and CEO of Solera Holdings.

Aquila is the former president and chief operating officer of Mitchell International, Inc., a company that provides claims estimating and communications software to insurance carriers. Aquila joined Mitchell in 2001 after it had acquired Ensera.

Aquila was founder and CEO of Ensera, Inc., a claims workflow software company for the vehicle insurance and collision industry.