Tim Cook is the Chief Executive Officer of Apple. He was named the CEO in 2011 when Steve Jobs resigned. Tim Cook filled the position of one of the greatest visionaries of our time. Cook had worked for 14 years at Apple gaining great experience. He makes decisions in an organization that has revolutionized the manner in which people view and use technology. He is a soft-spoken man and works hard. He begins sending emails at 4.30 am before he even starts his morning jog. 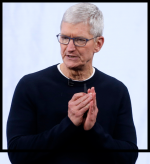