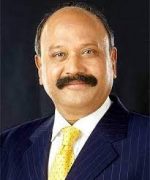 G M Rao was born on 14 July 1950, in Rajam, Srikakulam district in Andhra pradesh, India. He was born in an upper-middle-class family whose main business interests involved commodities trading and a small scale jewelry business started by his father in Rajam. After graduating from Andhra University, Rao joined the Andhra Pradesh Government as a junior engineer.

He soon entered the trading of commodities as his entrepreneurial nature made it difficult for him to stay content with a mere day job. After developing good relations with suppliers and customers in the business of commodities trading, he acquired a failing jute mill for at a bargain, this venture proved to be lucrative and allowed GM Rao is use leverage from local banks to acquire other assets. Eventually GM Rao divested his stake in a multitude of industries and started a bank named Vysya Bank in collaboration with ING.

As per Forbes magazine, G M Rao is the richest Telugu man by sheer quantifiable wealth. He is known for his down to earth nature and simplicity despite his enormous fortune. According to media reports, GMR Group is one of India’s most trusted and respect brands. GM Rao received the Economic Times Entrepreneur of the year Award in 2007.