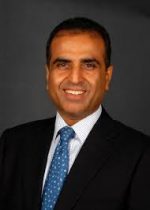 Sunil Bharti Mittal (born 23 October 1957) is an Indian entrepreneur, philanthropist and the founder, chairman and Group CEO of Bharti Enterprises, which has interests in telecom, retail, financial services, and agri business. The Group flagship Bharti Airtel, with operations in 20 countries across Asia and Africa and a customer base of over 275 million, is India’s largest telecom company and world’s third largest mobile operator. Bharti Airtel clocked revenues of over USD 14.5 billion in FY2013. He is listed as the 8th Richest person in India by Forbes with a Net worth of $7 Billion.

In 2007, he was awarded the Padma Bhushan, India’s third highest civilian honor. On 1 July 2013 he was elected Vice-Chairman of the International Chamber of Commerce Entrepreneurial ventures.

A first generation entrepreneur, Mittal started his first business in April 1976 at the age of 18, with a capital investment of ₹20,000 (US$300) borrowed from his father. His first business was to make crankshafts for local bicycle manufacturers.

In 1980, he along with his brothers Rakesh, Rajan started an Import Enterprise named Bharti Overseas Trading Company. He sold his bicycle parts and yarn factories and moved to Mumbai. In 1981, he purchased importing licences from exporting companies in Punjab.[11] He then imported thousands of Suzuki Motors’s portable electric-power generators from Japan. The importing of generators was suddenly banned by the then Indian Government.

In 1984, he started assembling push-button phones in India,[11] which he earlier used to import from a Taiwan company, Kingtel, replacing the old fashioned, bulky rotary phones that were in use in the country then. Bharti Telecom Limited (BTL) was incorporated and entered into a technical tie up with Siemens AG of Germany for manufacture of electronic push button phones. By the early 1990s, Mittal was making fax machines, cordless phones and other telecom gear. Mittal says, “In 1983, the government imposed a ban on the import of gensets. I was out of business overnight. Everything I was doing came to a screeching halt. I was in trouble. The question then was: what should I do next? Then, opportunity came calling. While in Taiwan, I noticed the popularity of the push-button phone — something which India hadn’t seen then. We were still using those rotary dials with no speed dials or redials. I sensed my chance and embraced the telecom business. I started marketing telephones, answering/fax machines under the brand name Beetel and the company picked up really fast.”. He named his first push-button phones as ‘Mitbrau’.

In 1992, he successfully bid for one of the four mobile phone network licences auctioned in India. One of the conditions for the Delhi cellular license was that the bidder have some experience as a telecom operator. So, Mittal clinched a deal with the French telecom group Vivendi. He was one of the first Indian entrepreneurs to identify the mobile telecom business as a major growth area. His plans were finally approved by the Government in 1994 and he launched services in Delhi in 1995, when Bharti Cellular Limited (BCL) was formed to offer cellular services under the brand name AirTel. Within a few years Bharti became the first telecom company to cross the 2-million mobile subscriber mark. Bharti also brought down the STD/ISD cellular rates in India under brand name ‘Indiaone’.

In May 2008, it emerged that Sunil Bharti Mittal was exploring the possibility of buying the MTN Group, a South Africa-based telecommunications company with coverage in 21 countries in Africa and the Middle East. The Financial Times reported that Bharti was considering offering US$45 billion for a 100% stake in MTN, which would be the largest overseas acquisition ever by an Indian firm. However, both sides emphasize the tentative nature of the talks, while The Economist magazine noted, “If anything, Bharti would be marrying up,” as MTN has more subscribers, higher revenues and broader geographic coverage. However, the talks fell apart as MTN group tried to reverse the negotiations by making Bharti almost a subsidiary of the new company. In May 2009, Bharti Airtel again confirmed that it was in talks with MTN and the companies agreed to discuss the potential transaction exclusively by 31 July 2009. Talks eventually ended without agreement, some sources stating that this was due to opposition from the South African government.

In June 2010, Bhartil led by Mittal acquired the African business of Zain Telecom for $10.7 billion making it the largest ever acquisition by an Indian telecom firm.In 2012, Bharti tied up with Wal-Mart, the US retail giant, to start a number of retail stores across India. In 2014, Bharti planned to acquire Loop Mobile for INR 700 crores, but the deal was called off later.