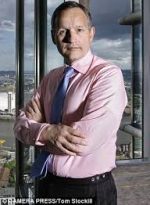 Antony Peter Jenkins (born 11 July 1961) is a British business executive. He was the group chief executive of Barclays from 30 August 2012 until he was sacked on 8 July 2015.

Jenkins grew up in Stoke-on-Trent, and was educated at Oxford University, where he received a BA in Philosophy, Politics and Economics. He also holds an MBA from Cranfield School of Management.

He began his career in finance at Barclays as a graduate in 1983, but subsequently moved to Citigroup and rose to head the company’s branded credit card business. In 2006, he returned to Barclays to take over the company’s Barclaycard division. In 2009, Jenkins was promoted to chief executive of the retail and business banking group and asked to join the executive committee.

Jenkins was appointed as the group chief executive of Barclays on 30 August 2012. In February 2014, Jenkins announced he would be declining his bonus for 2013 following a series of scandals. On 8 July 2015 it was announced that he had been sacked by Barclays after a dispute with the board over the size of the investment bank and the pace of cost cutting. Barclays deputy chairman Sir Michael Rake said a “new set of skills” was required at the head of the group.

He is a member of the steering group for the Big Innovation Centre – an initiative of the Work Foundation and Lancaster University. He is also closely involved with a number of charitable institutions as well as being a Patron for Government Employee Engagement.

Jenkins is also a One Young World Counsellor, speaking to One Young World delegates about responsible capitalism at Summits in Zurich, Switzerland in 2011, Pittsburgh, USA in 2012, Johannesburg, South Africa in 2013 and Dublin, Ireland in 2014.

On 9th June 2016 he was appointed Shadow Chair of the Institute for Apprenticeships by the Department for Business, Innovation and Skills, prior to its formal operational start in 2017.

Jenkins met his wife, Amanda Benson, during his student days and they married in 1984. The couple have two children. He is an ardent music lover who says he listens to rock, jazz, or classical music.