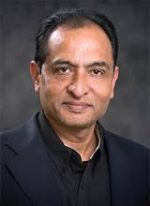 He received a BSEE from Osmania University, in Hyderabad, India and an MSEE from the University of Michigan.

Mr. Ali worked at Samsung Electronics, SGS-Thompson, Tandem Computers, and American Microsystems Inc. (now part of ON Semiconductor) before becoming part of the founding management team at Malleable Technologies, which was acquired by PMC Sierra in 2000.