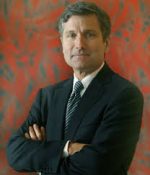 Stephen B. “Steve” Burke (born August 14, 1958) is an American businessman. He serves as the executive vice president of Comcast, and as president and chief executive officer (CEO) of NBCUniversal.

Steve Burke is an Irish Catholic. His father, Daniel B. Burke was a former president of Capital Cities Communications, former owner of the ABC network. He graduated from Colgate University, where he was a member of Phi Beta Kappa, and earned an MBA from the Harvard Business School.

Burke joined The Walt Disney Company in January 1986, where he helped to develop and found The Disney Stores. In 1992, he moved to Euro Disney S.A., where, as President and CEO, he helped to lead a comprehensive restructuring effort. He later served as President of ABC Broadcasting.

In 1998, he joined Comcast as President of Comcast Cable. Since then, Comcast has become the largest cable company, largest residential internet service provider, third largest phone company in America and launched a wireless business. He led Comcast to leadership in multi-platform video entertainment distribution, including the Company’s industry changing video on demand platform and online video offerings. He has been praised for leading the highly successful integration of AT&T Broadband with Comcast.

He currently serves as the Chief Executive Officer of NBCUniversal. He oversees the company’s valuable portfolio of news, sports, and entertainment networks, a premier motion picture company, significant television production operations, a leading television stations group, and theme parks. Burke assumed this role in January 2011, upon the closing of Comcast and General Electric’s joint venture merging the assets of NBCUniversal with Comcast’s programming assets. He previously served as Chief Operating Officer of Comcast Corporation, where he was a driving force in its growth from a cable industry leader to one of the nation’s leading providers of entertainment, information and communication products and services.