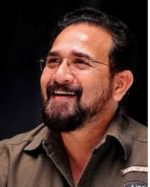 Career:
From 1982 to 1988, he was a freelance graphics designer for companies such as Welcomgroup Hotels, the Taj Group of Hotels, and Madura Coats. In 1988, he began his art director career, and has directed more than 480 advertisements, 3 teleserials and 50 feature films in Malayalam, Hindi, Tamil, Telugu and Kannada and designed several stage shows. In 1996, he directed the stage design for the Miss World beauty pageant. He also worked as one of the 2nd unit directors in the 1990 film Iyer the Great.