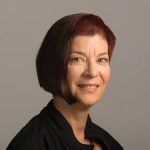 Baker received a BA in Chinese studies at the University of California, Berkeley in 1979, achieving a Certificate of Distinction. She received her JD from the Boalt Hall School of Law, University of California, Berkeley in 1987 and was admitted to the State Bar of California in the same year. From January 1990 until October 1993, she worked as a Corporate and Intellectual Property Associate at Fenwick & West LLP, a law practice that specialises in providing legal services to high technology companies. She then worked for Sun Microsystems as an Associate General Counsel from November 1993 until October 1994.

In November 1994, Baker was hired as one of the first employees of the legal department of Netscape Communications Corporation.Reporting directly to CEO Jim Barksdale, she jointly set up the initial department. She was responsible for intellectual property protection and legal issues relating to product development, reporting to the General Counsel. She also created and managed the Technology Group of the Legal Department. She was involved with the Mozilla project from the outset, writing both the Netscape Public License and the Mozilla Public License. In February 1999, Baker became the Chief Lizard Wrangler (general manager) of mozilla.org, the division of Netscape that coordinated the Mozilla open source project. In 2001, she was fired during a round of layoffs at America Online, by then the parent of Netscape. Despite this, she continued to serve as the Chief Lizard Wrangler of mozilla.org on a volunteer basis.

In November 2002, Baker was employed by the Open Source Applications Foundation, helping to guide the group’s community relations and taking a seat on OSAF’s Board of Directors.From the outset, she also had part of her time assigned to working on mozilla.org issues. However, the division of her hours gradually became more and more weighted towards her Mozilla work at the expense of her OSAF duties, leading to her decision to return to Mozilla full-time in January 2005. She retained her seat on OSAF’s board.

On January 8, 2008, Mozilla announced that Baker, while retaining her role as Chairperson of the Mozilla Foundation, would no longer serve as CEO of the Corporation, and that MoCo’s Chief Operating Officer John Lilly would take over this role.The reasons cited for this change was Mozilla’s rapid growth, which made it difficult for executives to continue to wear many hats.

Mitchell Baker was listed among the 2005 Top 100 by TIME Magazine, in the “Scientists & Thinkers” section.