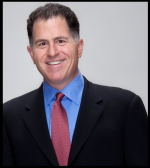 Michael Saul Dell was born in 23th February, 1965 in Houston, to a Jewish family whose last name reflacts the translation into English of the original German Thal (“valley” or “dale”; modern common-noun spelling Tal since the 1901 German orthographic change) upon the family’s movement to the United States. Is an American very rich person financial specialist and philanthropist. He is the organizer, director and Managing Director Chief executive officer of Dell Technologies, one of the world’s biggest innovation infrastructure organizations. He is positioned 25th richest on the planet by Bloomberg Billionaires Index, with a total net worth of US$51.7 billion as of April 17, 2021.

His parents were Lorraine Charlotte a stockbroker, and Alexander Dell, an orthodontist. Michael Dell went to Herod Elementary School in Houston. Dell wedded Susan Lieberman on 28th October, 1989, in Austin, Texas; the couple reside there with their four youngster’s child. He would proceed to go to Memorial High School. In a bid to enter business early, he applied to take a secondary school equivalency test at age eight. In his initial teenagers, he contributed his earnings from part time jobs in stocks and valuable metals.

While a freshman pre-drug students at the University of Texas, Dell began a casual business assembling and selling update kits for PCs in Room 2713 of the Dobie Center private structure. He then, at that point applied for a merchant permit to bid on agreements for the State of Texas, winning offers by not having the overhead of a PC store. In January 1984, Dell banked on his conviction that the likely cost savings of a maker selling PCs straightforwardly had enormous advantages over the conventional indirect retail channel. In January 1984, Dell enrolled his organization as “PC’s Limited”. Working out of a condominium, the business sold somewhere in the range of $50,000 and $80,000 worth of PC upgrades, kits, and extra parts. In May, Dell fused the organization as “Dell Computer Corporation” and relocated to a business place in North Austin.