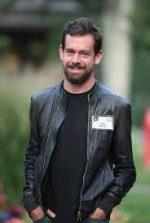 Jack Dorsey (born November 19, 1976) is an American computer programmer and entrepreneur widely known as a co-founder and CEO of Twitter, and as the founder and CEO of Square, a mobile payments company. In 2008, he was named to the MIT Technology Review TR35 as one of the top 35 innovators in the world under the age of 35. For 2012, The Wall Street Journal gave him the “Innovator of the Year Award” for technology.
Early life:
Dorsey was born and raised in St. Louis, the son of Marcia (Smith) and Tim Dorsey. He is of part Italian descent. His father worked for a company that developed mass spectrometers and his mother was a homemaker. He was raised Catholic, and his uncle is a Catholic priest in Cincinnati. He went to Catholic high school, at Bishop DuBourg High School.

By age fourteen, Dorsey had become interested in dispatch routing. Some of the open source software he created in the area of dispatch logistics is still used by many taxi cab companies. Dorsey attended the Missouri University of Science and Technology before subsequently transferring to New York University, but he dropped out. He first came up with the idea that became Twitter at New York University. While working on dispatching as a programmer, he later moved to California.

In Oakland in 2000, Dorsey started his company to dispatch couriers, taxis, and emergency services from the Web. His other projects and ideas at this time included networks of medical devices and a “frictionless service market”. In July 2000, building on dispatching and inspired in part by LiveJournal and possibly by AOL Instant Messenger, he had the idea for a Web-based realtime status/short message communication service.

When he first saw implementations of instant messaging, Dorsey wondered whether the software’s user status output could be shared among friends easily. He approached Odeo, which at the time happened to be interested in text messaging. Dorsey and Biz Stone decided that SMS text suited the status message idea, and built a prototype of Twitter in about two weeks. The idea attracted many users at Odeo and investment from Evan Williams who had left Google after selling Pyra Labs and Blogger.
Twitter:
Williams, Stone and Noah Glass co-founded Obvious Corporation, which then spun off Twitter Inc. with Dorsey as the CEO. As chief executive officer, Dorsey saw the startup through two rounds of funding by the venture capitalists who backed the company. He reportedly lost his position for leaving work early to enjoy other pursuits such as yoga and fashion design.

As the service began to grow in popularity, Dorsey chose the improvement of uptime as top priority, even over creating revenue – which, as of 2008, Twitter was not designed to earn. Dorsey described the commercial use of Twitter and its API as two things that could lead to paid features. He describes his three guiding principles, which he says are shared by the company, as simplicity, constraint and craftsmanship.

On October 16, 2008, Williams took over the role of CEO, while Dorsey became chairman of the board. On March 28, 2011, Dorsey returned to Twitter as Executive Chairman after Dick Costolo replaced Williams as the CEO. On June 10, 2015, Costolo announced that he was resigning as CEO of Twitter effective July 1, 2015. Dorsey would assume the post of Interim CEO upon Costolo’s departure. He was named permanent CEO of Twitter on October 5, 2015. On the day after the controversy about Twitter’s new algorithms for tweets, Dorsey responded to the trend saying it was only a hoax.

In May 2016, Dorsey announced that Twitter would not count photos and links in the 140-character limit to free up more space for text. This move was an attempt to entice new users since the number of tweets per day was at an all-time low of about 300 million in January 2016 compared to about 500 million in September 2013 and its peak of 661 million in August 2014.

Dorsey developed a small business platform to accept debit and credit card payments on a mobile device called Square, released in May 2010. The small, square-shaped device attaches to iPhone, iPad, iPod Touch, or Android devices via the headphone jack, and as a mini card reader allows a person to swipe their card, choose an amount to transfer to the recipient and then sign their name for confirmation. Square is also a system for sending paperless receipts via text message or email, and is available as a free app for iOS and Android OS. The company grew from 10 employees in December 2009 to over a hundred employees by June 2011. Square’s office is located on Market Street in San Francisco. In September 2012, Business Insider magazine valued Square Inc. at $3.2 billion. Dorsey is CEO of Square, Inc. On October 14, 2015, Square filed for an IPO to be listed on the New York Stock Exchange.