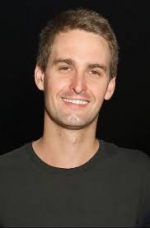 The man known behind the creation of the popular mobile application, Snapchat, is an American entrepreneur and is the CEO and Co-founder of the app. Evan Thomas Speigel, commonly known by the name Evan Spiegel, has led a luxurious life with both parents, John W. Spiegel and Melissa Ann Thomas, as lawyers. However, Snapchat was not his first project, but it followed several failures and developments that paved his way towards success.
Early Life:
Similar to the founder of Facebook, Mark Zuckerberg, Evan had a privileged life and was a similar nerd with a technology refuge and got his 1st computer in his 6th grade. Moreover, he also conducted experiments with Photoshop during his school time and used to spend his free weekends at the art lab of a local high school. He also worked for the promotion of Red Bull at bars and clubs, when he was in his high school.

After finishing his school, he entered Stanford University in a product design program and then into the Kappa Sigma fraternity, where he met the co-founder, Bobby Murphy. Spiegel was hired by Murphy for the job of designing an online social network, taking an inspiration from the Google Circles, but it failed. However, it earned recognition for Evan, who was perceived by Scott Cook in a guest lecture, followed by a job offer for txtWeb, a project meant to broadcast information from web over text messages.

He developed his first project with Murphy, Future Freshman, which was online software aimed to help in the management of college admissions by counselors, parents and high schoolers. Although it started well, yet couldn’t continue for long and then, fate knocked at their door, which was a good-welcomed opportunity by him. Reggie Brown, another one from the fraternity house, approached Evan to discuss his desire of deleting an image permanently from the web, which he once shared.
Career:
Evan and Murphy developed the basic idea of Snapchat and started working on its development with Brown. Initially, it was named Picaboo, as suggested by Brown, but couldn’t attract any investors’ support. However, due to some flaws and the idea that why one would share an image that disappears led to the downfall for the group.

There is real value in sharing moments that don’t live forever. – Evan Spiegel

Brown decided to part his ways and asked for 30% share along with the listing of his contributions with the same. Additionally, the original name was dropped, followed by a cease & desist letter from a company that used the same name.

So, Murphy and Spiegel decided to cut out Brown from the administration and renamed the project to Snapchat with the introduction of few more features. After this, it started attracting some response from young users and eventually, grew into a million dollar company, through many advancements and developments.
Awards:
2015 – Eddy

Co-founder of the Snapchat, Evan Spiegel