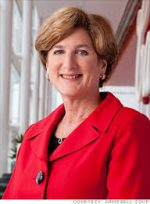 Denise M. Morrison is an American business executive who serves as President and Chief Executive Officer of Campbell Soup Company. Named the 21st Most Powerful Woman in Business by Fortune Magazine, Morrison was elected a Director of Campbell in October 2010. She is Campbell’s 12th leader in the company’s 140-year history.

Denise Morrison was born in Elberon, New Jersey, and is one of four sisters who have all enjoyed successful business careers. The “Sullivan Sisters” were featured in a 2007 Wall Street Journal article, “Raising Women to Be Leaders.” Denise is the first-born; Maggie Wilderotter is chairman and CEO of Frontier Communications; Colleen Bastkowski was a regional vice president of sales at Expedia Corporate Travel; and Andrea Doelling, a champion horse jumper, was senior vice president of sales at AT&T Wireless.Their father, Dennis Sullivan, a Korean War veteran and AT&T executive, wanted to share everything he knew about business with his girls. He reportedly talked with them while they were still in grade school about setting profit-margin goals. Their mother, Connie Sullivan, taught them that ambition is a part of femininity.

Morrison was named President and CEO of Campbell Soup Company on August 1, 2011. Campbell is a global manufacturer and marketer of consumer food products, focused on simple meals, soup, baked snacks, and beverages.

Morrison began her career in the sales organization at Procter & Gamble in Boston, Mass. She later joined Pepsi-Cola in Trade and Business Development. She then spent most of the 1980s at Nestle USA, where she held senior marketing and sales positions. In 1995, Denise moved to Nabisco Inc. She served as Senior Vice President and led the Nabisco Food Company’s sales organization and was General Manager for the Down the Street division.

In 2011, Forbes named Morrison the 80th most powerful woman in the world.

Morrison has been recognized with many other awards as well, including: Power 50, Supermarket News 2011; “Woman of Distinction” American Heart Association of New Jersey, 2010; One of the 50 Most Influential Irish Women, Irish Voice 2010; Trailblazer Award; “Top Woman in Grocery,” Progressive Grocer magazine, 2008, 2009, and 2010; One of the Top 50 Women in Business in the State of N.J., NJBIZ magazine, 2008; One of the Top 50 Women to Watch, Wall Street Journal, 2007; “Aiming High Award” by Legal Momentum, 2007; and Garden State “Woman of the Year” for Corporations, Garden State Women magazine, 2007.