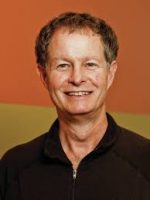 John Mackey (born August 15, 1953) is an American businessman. He is the current co-CEO of Whole Foods Market, which he co-founded in 1980. Named the Ernst & Young Entrepreneur of the Year in 2003, Mackey is a strong supporter of free market economics, has strong anti-union views, and co-wrote the best-selling book Conscious Capitalism, which was released in 2013. He is one of the most influential advocates in the movement for organic food.

Mackey was born on August 15, 1953 in Houston, Texas, to Bill and Margaret Mackey. He has a sister and a brother.

Mackey was a student of philosophy and religion at the University of Texas at Austin and Trinity University in the 1970s, and worked at a vegetarian co-op. Mackey spent almost six years studying various topics, deciding to focus solely on his interests and not purely seek out a degree. Mackey credits his generalist approach to learning as the main reason he was able to be successful in business. Mackey’s thoughts on being a generalist appear to be backed up by Edward P. Lazear an American Economist who studied factors that lead to being a successful entrepreneur. Mackey who was a vegetarian for 30 years, now identifies as a vegan.

Mackey co-founded his first health food store, SaferWay, with his girlfriend Renee Lawson (Hardy) in Austin in 1978. They met while living in a vegetarian housing co-op. They dropped out of college.

They borrowed $10,000 and raised $35,000 more to start SaferWay. At the time, Austin had several small health food stores. The two ran the market on the first floor, a health food restaurant on the second, and, for a short time, lived in the third story of their building. In two years, they merged SaferWay with Clarksville Natural Grocery run by Mark Skiles and Craig Weller and renamed the business Whole Foods Market. All four (Mackey, Hardy-Lawson, Skiles and Weller) are considered co-founders of the business.

Mackey built Whole Foods into an international organization, with outlets in major markets across the country, as well as Canada and the United Kingdom. Along the way he bought out smaller competitors. In 2007 Whole Foods purchased a major natural foods supermarket competitor, Wild Oats Markets, Inc.

hole Foods was the first grocery chain to set standards for humane animal treatment. Mackey was influenced by animal rights activist, Lauren Ornelas, who criticized Whole Foods’ animal standards regarding ducks at a shareholder meeting in 2003. Mackey gave Ornelas his email address and they corresponded on the issue. He studied issues related to factory farming and decided to switch to a primarily vegan diet that included only eggs from his own chickens. Since 2006, he has followed an entirely plant-based diet. He advocates tougher animal standards.

Despite Whole Foods’ welfare standards, Mackey has been criticized by abolitionist vegans such as Gary L. Francione, who believes the Whole Foods company policies betray the animal rights position. By other accounts, Mackey is the “driving force” behind significant changes in animal welfare. For instance, he started a non-profit foundation, the Animal Compassion Foundation, to address making animal welfare more economically viable. The Animal Compassion Foundation folded in 2008 with the formation of the Global Animal Partnership, a nonprofit organization that is independent of Whole Foods Market. Mackey is on the Board of Directors of Global Animal Partnership. Additionally, he is a board member of Farm Forward, a 501(c)(3) nonprofit organization that implements innovative strategies to promote conscientious food choices, reduce farmed animal suffering, and advance sustainable agriculture, and he has been a member of the Board of Directors for the Humane Society of the United States since 2009.

In 2006, Mackey announced he was reducing his salary to $1 a year, would donate his stock portfolio to charity, and set up a $100,000 emergency fund for staff facing personal problems. He wrote: “I am now 53 years old and I have reached a place in my life where I no longer want to work for money, but simply for the joy of the work itself and to better answer the call to service that I feel so clearly in my own heart.”
He has instituted caps on executive pay at the company.

In a debate in Reason magazine among Mackey, economist Milton Friedman, and entrepreneur T. J. Rodgers, Mackey said that he is a free market libertarian. He said that he used to be a democratic socialist in college. As a beginning businessman he was challenged by workers for not paying adequate wages and by customers for overcharging, during a time when he was hardly breaking even. He began to take a more capitalistic worldview, and discovered the works of Ludwig von Mises, Friedrich Hayek and Milton Friedman. Mackey is an admirer of some of Ayn Rand’s novels.

Mackey co-founded the organization Freedom Lights Our World (FLOW) to combine his commitments to “economic and political freedom as well as personal growth, social responsibility, and environmental stewardship.” He supports such changes as green tax shifts, environmental trusts, world legal systems to allow the poor to create legal businesses, and a citizen’s dividend to help the poor in the developed world. The name and focus of FLOW have since become Conscious Capitalism, Inc., which was initially created as a program of FLOW and evolved to the point at which it became the organization’s principal focus. In 2010 the name of the organization was formally changed. The Conscious Capitalism Institute was chartered in 2009. In 2010 the original FLOW group merged with the Institute group to become one unified organization.[20] In 2013 Mackey was interviewed in Harvard Business Review’s Ideacast podcast about his views on Conscious Capitalism. Mackey said, “If you want to be competitive in the long term, your business needs to have discovered its higher purpose and it needs to adopt a stakeholder philosophy.” He eschewed the conventional thinking that “business has to be sort of ruthless and heartless to be successful”.

Mackey opposed the public health insurance option that ultimately did not become part of the Patient Protection and Affordable Care Act. Mackey thinks a better plan would be allowing consumers to purchase health insurance across state lines and use a combination of health savings accounts and catastrophic insurance, as Whole Foods does. Mackey’s statement that Americans do not have an intrinsic right to healthcare led to calls for a boycott of Whole Foods Market from the Progressive Review and from numerous groups on Facebook. Alternatively, Tea Party movement advocates organized a number of buycotts in support of Mackey’s suggestions.

In August 2009, Mackey wrote the editorial in the Wall Street Journal expressing his viewpoints on universal healthcare in the United States. “While we clearly need health-care reform, the last thing our country needs is a massive new health-care entitlement that will create hundreds of billions of dollars of new unfunded deficits and move us much closer to a government takeover of our health-care system,” he wrote. He continued: “Many promoters of health-care reform believe that people have an intrinsic ethical right to health care—to equal access to doctors, medicines and hospitals. While all of us empathize with those who are sick, how can we say that all people have more of an intrinsic right to health care than they have to food or shelter?”

In an NPR interview in 2013, Mackey compared the Obama administration’s healthcare law to ‘fascism’ instead of socialism, stating, “technically speaking, it’s more like fascism. Socialism is where the government owns the means of production. In fascism, the government doesn’t own the means of production, but they do control it — and that’s what’s happening with our health care programs and these reforms.” The day following the interview, Mackey wrote in a blog post that he regretted having made the remark, stating that he “made a poor word choice to describe [the U.S.] healthcare system.” Instead, he called it ‘government-controlled health care’

On July 20, 2007, The Wall Street Journal revealed that Mackey was, for at least seven years, using the pseudonym “Rahodeb” (an anagram of his wife’s name, Deborah) to post to Yahoo Finance forums. He referred to himself in the third person and criticized rival supermarket chain Wild Oats Markets. The Federal Trade Commission approved a complaint challenging Whole Foods Market’s approximately $670 million acquisition of its chief rival, Wild Oats Markets, Inc. It authorized the FTC staff to seek a temporary restraining order and preliminary injunction in federal district court to halt the deal, pending an administrative trial on the merits. After an extensive regulatory battle with the FTC, a federal appeals court consented to the deal. Whole Foods officially completed their buyout of Wild Oats on August 27, 2007.

In May 2008, after an SEC investigation cleared him, Mackey started blogging again. In a 2,037 word post, he wrote about why he began blogging in the first place and how his upbringing drove him to defend himself and Whole Foods. He admitted he made a mistake in judgment, but not in ethics.