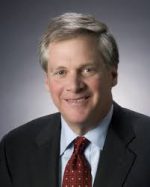 Douglas R. Oberhelman (born February 25, 1953) is an American businessman. He is the CEO of Caterpillar Inc. in Peoria, Illinois.

Oberhelman was raised in Woodstock, Illinois, where his father was a John Deere salesman. Oberhelman attended Millikin University, where he was a member of Sigma Alpha Epsilon. He graduated with a Bachelor’s degree in 1975.

Oberhelman joined Caterpillar shortly after his college graduation in 1975. He became a Caterpillar Vice President in 1995, serving as Chief Financial Officer from 1995 to 1998. He succeeded Jim Owens as CEO on July 1, 2010 and as Chairman of the Board on November 1, 2010.

He sat on the board of Ameren until April 27, 2010. He served as Vice Chairman of the Executive Committee of The Business Council in 2013 and 2014.

In September 2009, he was elected to the Board of Directors of World Resources Institute.

His wife, Diane Oberhelman, is chairwoman of Cullinan Properties Ltd.

In 2011 Oberhelman earned a salary of $16.9 million, a sixty percent increase from his earnings the previous year.