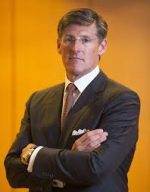 Michael L. Corbat (born May 2, 1960) is an American banker and the current chief executive officer of Citigroup, a position he has held since October 2012.

Born in Bristol, Connecticut, Corbat graduated from Harvard University with a B.A. in economics where he also played offensive guard for the school’s football team. He was two time all Ivy League and was selected as first string College Football All-America Team in NCAA Division I-AA in 1982. He was the first Harvard player to be selected since Dan Jiggetts in 1975. While at Harvard Mr. Corbat was a member of The AD finals club along with several other social societies.

Corbat has worked at Citi or its predecessor companies for his entire career, starting with Salomon Brothers. He has served as Head of Citi’s Global Corporate Bank and Global Commercial Bank and CEO of Citi’s Global Wealth Management (consisting of Smith Barney and the Citi Private Bank). As CEO of Citi Holdings, he was responsible for and led the divestiture of a portfolio of non-core business and assets following the financial crisis of 2008 and Citi’s participation in the Troubled Asset Relief Program.[citation needed] In 2011, he was named CEO of Europe, Middle East and Africa (EMEA) where he oversaw all Citi operations in the region. In October 2012, Mike Corbat was appointed CEO of Citi.