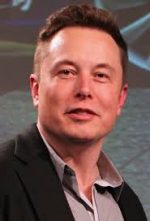 Net worth       :          $11.9 Billion
Early Life
When talent and dedication come together, the result is Elon Musk. Never one to rest on his laurels, Musk has moved from achievement to other all the time, bringing to the world a fresh idea or invention. Born in South Africa, Musk’s father was a mechanical engineer and his mother was a popular model. Musk began his entrepreneurial ventures very young – at age ten, he bought his first computer. He learned computer programming on his own and by the age of twelve, had created a game called Blaster which he sold for US$500.

Musk felt that it would be easier to immigrate to the United States from Canada than from South Africa. So, in 1989, he took admission to Queen’s University in Canada while seventeen. In 1992, Musk transferred to the University of Pennsylvania. After earning a bachelor’s degree in economics, he pursued a second undergraduate degree in physics. The thirst for knowledge was inborn in Musk, something that is not often seen in people.
Career:
Not content with two undergraduate degrees, Musk moved to California to pursue a PhD in energy physics at Stanford University. However, he quit after only 2 days at the program to become a part of the Internet boom. His first company, Zip2 Corporation, was an online city guide that provided information for the New York Times and the Chicago Tribune. Musk became a multimillionaire in his late 20s by selling Zip2 to Compaq Computers for US$ 307 million cash and US$ 34 million as stock options.He moved on to co-establish an online payments company called X.com, which later became as PayPal. Musk owned 11% of the company’s stock. In 2002, eBay acquired PayPal for US$ 1.5 billion in stock.

Next on his agenda came a commercial space travel company called SpaceX. NASA gave the company a US$ 1.6 billion contract to supply the International Space Station. In 2015, SpaceX was able to raise US$ 1 billion by roping in new investors like Fidelity and Google. This made the value of the company a little over US$ 10 billion.
Achievements:
Musk had more on his plate – Tesla Motors, a luxury electric car maker, which he co-founded in 2003, raised US$ 226 million by launching its initial public offering in 2010. He established the Musk Foundation that supports space exploration and the discovery of renewable energy sources. Musk is also the owner of Solar City, a solar panel designer and installer.The slew of inventions show no sign of stopping. Musk’s new concept of transportation, known as “The Hyperloop” was released in 2013. According to this concept, travel between major cities would happen at speeds above 700 miles per hour.Musk estimates that the Hyperloop will take from 7-10 years to be built and ready for use.Naturally, his ambitious project has met with skepticism. But, Musk being Musk, we will only have to wait and watch!
Awards:
2015 – Entrepreneur of the Year, IEEE Honorary Membership