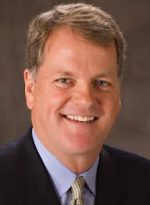 Parker grew up in Michigan and received a BA in Economics from Albion College (1984). He then received an MBA from the Owen Graduate School of Management at Vanderbilt University (1986), where American Airlines offered him a job after a campus interview.

Parker was a financial analyst at American Airlines from 1986 to 1991, where he was a member of then CEO Robert Crandall’s, “Brat Pack”, alongside Thomas W. Horton (former CEO President and Chairman of American), C. David Cush (CEO of Virgin America) and Ben Baldanza (former CEO of Spirit Airlines).

Parker joined Northwest Airlines in 1991 and was tasked to help create a team that would systematically figure out where the airline was making and losing money. Tracking profits flight-by-flight in such detail at that level was a first for Northwest.

Parker became Chief Financial Officer of America West Airlines in 1995 after returning to USA, and because then-CEO Bill Franke wanted to train him to be a CEO, Parker moved around between finance, sales and operations. Parker was named Chairman and CEO in September 2001, 10 days before the 11 September terrorist attacks. Under Parker, America West was the first of several airlines to win post-9/11 federal loan guarantees, saving the airline from a second bankruptcy.

America West and US Airways merged in 2005, with Parker continuing as CEO of the combined company. US Airways made an unsuccessful bid to merge with Delta Air Lines as it was in bankruptcy protection in 2006, faltering as Delta rallied workers and creditors against the hostile bid. Creditors rejected the bid in early 2007. US Airways also attempted a merger with United Airlines in 2008 and in 2010, but United ultimately merged with Continental Airlines.
American Airlines career
In 2012, US Airways launched an effort to merge with American Airlines, while American’s parent company, AMR Corporation, was in bankruptcy protection. US Airways took the unprecedented step of securing tentative contracts with American’s labor groups, while AMR was still pushing to exit bankruptcy. That deal closed on 9 December 2013, and Parker was named CEO of the combined company, which became the world’s largest airline.

Parker lives in Dallas, Texas with his wife, Gwen Parker, and three children. In 2007, Doug Parker pleaded guilty to his third DUI and was sentenced to 1 day in jail. After his conviction, shareholders questioned if the company should have disclosed Parker’s two previous DUI arrests.