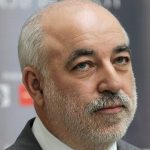 He was the co-owner and Chairman of Tyumen Oil in the mid-90s before it brokered a deal with British Petroleum. He is the founder of SUAL Holdings, later renamed the RUSAL Company, considered to be the most successful aluminum company in the world. He also owns the Renova Group, a holding company. He is also the head of Skolkovo, a government project that aims to build a center for computer production in Russia.