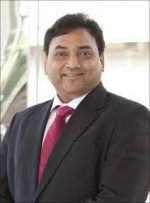 Lagadapati Madhusudhan Rao is an Indian businessman and the Executive Chairman of Lanco Infratech, and the brother of Lagadapati Rajagopal. Forbes listed him as the 29th richest Indian with a net worth of $2.3 billion

Born in Guntur in Andhra Pradesh in 1966, Madhusudhan Rao completed a BE from V.R Siddhartha Engineering College, Vijayawada, and an ME in design engineering from PSG College of Technology, Coimbatore. He went on to earn another MS degree in industrial engineering from Wayne State University, Detroit, USA.

Subsequently, He also had a brief stint in various aspects of Quality Management at Waggner Corporation in the United States.On his return, Madhusudhan Rao joined the team in building up Lanco Industries Limited near Tirupati, in Andhra Pradesh. He became the Managing Director of the company in 1992. He became the Executive Chairman of Lanco Infratech Limited in 2002. Under his leadership, Lanco Infratech has emerged as one of India’s fastest growing business conglomerates. According to Forbes magazine, he stands at No. 29 among the richest persons in India.