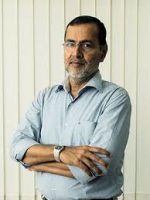 Kochouseph Thomas Chittilappilly is an Indian businessperson, writer, philanthropist and humanist. He is the founder Chairman and Managing Director of V-Guard Industries Ltd and a chain of amusement parks called Wonderla. K. Chittilappilly Foundation, a non profit organization founded by him is engaged in charitable and philanthropic activities. Chittilappilly is a recipient of the Rashtriya Samman award from the Government of India for being among the highest taxpayers and the Newsmaker of the Year 2011 award from Malayala Manorama. As the chairman of the Stray Dog Free movement, he has advocated for government action to address the “menace” of stray dogs in his home state of Kerala, and has criticized legislation forbidding the killing of stray dogs.

K. Chittilapilly Foundation, founded by Kochouseph Chittilapilly, is a non profit organization and serves as the conduit for his philanthropic activities. The foundation, based in Kakkanadu, Kochi, also oversees the activities of Thomas Chittilapilly Trust, another charitable venture of Chittilapilly which is named after his father and runs two institutions, an old age home where elderly people are housed and provided with sustenance and medical care, and Shantimandiram, a home for destitute children where they are provided with shelter, education and food. The institutions are managed by the Sisters of Nirmala Province, a provincialate of catholic nuns located at Kolazhy in Thrissur. It has also instituted an organ donation award for recognising people who come forward for organ donation and to promote organ donation among people. The foundation offers awards for those who voluntarily donate their own organs or to families who donate the organs of their brain-dead relatives; the awards carry cash components ranging from ₹100,000 to ₹500,000, totaling ₹3.7 million every year.

Awards:
Chittilapilly is a recipient of Rashtriya Samman from the Government of India for being the highest tax payer in India. He was selected as the Malayala Manorama Newsmaker of the year 2011, the year he became an organ donor, the award reaching him in 2012. He is also a recipient of awards such as Millennium Businessman of Kerala from Business Deepika, Tourism Man of the Year 2000 from Destination Kerala, Manager of the Year 2000 from the Travancore Management Association and Tourism Man of the Year 2011 from the Association of Tourism Trade Organisations, India (ATTOI)