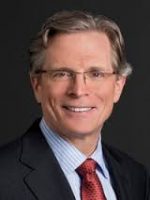 John R. Strangfeld is an American businessman. He is the current Chairman, Chief Executive Officer, and President of Prudential Financial.

Strangfeld has been with Prudential since July 1977, serving in various management positions, including the executive in charge of Prudential’s Global Asset Management Group since 1996, Senior Managing Director of The Private Asset Management Group from 1995 to 1996, and Chairman at PRICOA Capital Group (London) Europe from 1989 to 1995. Strangfeld is also a member of the Raven Society, the oldest and most prestigious honorary society at the University of Virginia. He holds the Chartered Financial Analyst designation.

Strangfeld received a B.S. in Business Administration from Susquehanna University and an M.B.A. from the Darden School of Business at the University of Virginia.