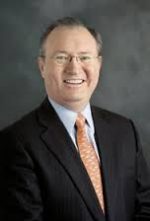 Glenn Tilton (born April 1948, in Washington, D.C.) was Midwest Chairman and a member of the Executive Committee, at JP Morgan Chase, a position he has held from June 6, 2011 to 2014. Tilton was formerly non-executive Chairman of United Continental Holdings Inc., the parent company of United Air Lines, Inc. and Continental Airlines, Inc. as of October 1, 2010. Tilton was formerly Chairman, President, and CEO of UAL Corporation from 2002-2010.
Tilton testifies before the United States Senate Committee on Commerce, Science and Transportation in June 2010

Tilton grew up in Latin America, and attended high school in Brazil, where his father worked for the United States’ Central Intelligence Agency. After earning a bachelor’s degree in International Relations from the University of South Carolina, Tilton wanted to start a career in the airline industry, but was warned against it by a family friend, the manager of the Pan American Airways Latin America Division. Tilton listened to the friend’s advice and went on to follow his father’s footsteps and join the C.I.A. but months before his start date, Tilton began a career in the private sector working for Texaco in 1970, servicing gas stations throughout Washington, D.C.

Tilton attained positions of increasing responsibility over the next three decades, and in early 2001 Tilton was briefly named chairman and chief executive officer before Chevron and Texaco merged to form ChevronTexaco Corporation. He was named vice chairman of the newly merged company in late 2001 and a few months later he was also named interim chairman of Dynegy, in which ChevronTexaco held a significant stake.

In September 2002, Tilton was recruited by the Board of Directors of the struggling UAL Corporation to be Chairman, President, and CEO, replacing John W. Creighton, Jr. as Chairman and CEO, and Rono Dutta as President. The board believed that an airline outsider such as Tilton could turnaround the struggling carrier. UAL Corporation and its subsidiaries filed for bankruptcy in December 2002, three months into Tilton’s tenure.

What would follow would be one of the largest, longest, and most complex bankruptcy cases in American history. UAL Corporation operated in bankruptcy until February 2, 2006.

Tilton is controversial for his stance as a major advocate for consolidation in the airline industry. Tilton has stated he believes it is the only way to end commercial aviation’s cycles of booms and busts. Since 2006, Tilton had been searching for a merger partner for United Airlines. In May 2010, Tilton inked a deal to merge UAL Corporation with Continental Airlines, Inc. to form United Continental Holdings, Inc. of which Tilton was the first Chairman of the Board. As agreed prior to the merger of United and Continental, Tilton was replaced by CEO Jeff Smisek as Chairman on December 31, 2012. Tilton remains a board member for UAL.

Glenn F. Tilton was inducted as a Laureate of The Lincoln Academy of Illinois and awarded the Order of Lincoln (the State’s highest honor) by the Governor of Illinois in 2014 in the area of Business & Industry.