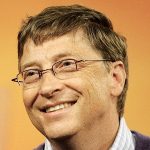 Bill Gates is the former chairman and chief executive of Microsoft Corp., the largest personal computer company in the world. He has always been considered as one of the richest men in the world, with Gates topping the list consistently from the mid-1990s to 2009.  In a way, Gates has already touched the lives of billions of human through the Windows operating system and the MS Office productivity suite. More than that, however, Gates has formed a foundation that would help conduct research on curing and preventing the AIDS disease, upgrading sanitation and improving education all over the world.