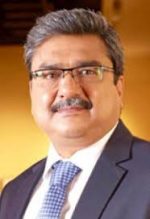 Anant Gupta was born in Delhi on 8 January 1965. He schooled across the country including Don Bosco, Chennai, Bal Bharti Air Force School and Modern School in Delhi thanks to his father’s travelling job.

Anant obtained B.Sc. (Hons) Physics with Electronics from St. Xavier’s College, University of Bombay in 1985 and M.Sc. (Engg) Microelectronics & Telecommunications, University of Liverpool, UK in 1987. He started his career as a Senior Design Engineer & Manager-R&D at India Telecomp Ltd where he set up the design group at the company.

Anant began his career with HCL in 1993. Since then he has held a series of leadership positions in the company, most recently as President of HCL’s Infrastructure Services Division. In this role, he led the company’s foray into global markets through its pioneering Remote Infrastructure Management (RIM) Services and was responsible for its business results in all the global markets in which HCL operates. Having been a key architect of the RIM model, he led the Division to become a $1bn business for the company growing its contribution to HCL’s revenues from 10.2% in 2005 to almost 30% today.

Anant Gupta has written “The Blackbook on the Remote Infrastructure Management (RIM) Industry– Demystifying the third ‘wave’ of Outsourcing”.He is a founding member of NASSCOM’s RIM Forum.

Anant has played a transformational role in the evolution of the IT Operations Management space, having pioneered three revolutionary delivery models – RIM as an alternate to the prevalent Total Outsourcing model, Business Ready Infrastructure (BRI) Service as a smart sourcing alternate for Utility Computing and the world’s first hosted pay-by-use Enterprise Systems Management Framework called MTaaS. He is also credited with playing a pioneering role in outlining the contours of several emerging technology formats and delivery models. His work on defining the 21st Century Enterprise blueprint enabled by Digitalization, Internet-isation of Things and Next-generation ITO has seen him win several prestigious citations, including being appointed as Chairman of WEF’s Steering Committee on IIoT.

Anant has also been a Task Force member of the New Energy Architecture project run by the World Economic Forum and has contributed significantly to global research literature on next generation Technology paradigms. His writings on this subject can be viewed at his LinkedIN Influencer Blog here.

Anant is a passionate proponent of the Sustainability & Diversity agenda. His efforts towards empowering women employees at HCL won him the prestigious 2014 Women’s Empowerment Principles (WEPs) Leadership Award – 7 Principles from UN Women and UN Compact.

Anant serves as a Trustee of the HCLT Foundation and is also the Executive Sponsor for the company’s Diversity and Sustainability programs.His efforts towards empowering women employees at HCL recently won him the prestigious “2014 Women’s Empowerment Principles (WEPs) Leadership Award – 7 Principles” from UN Women and UN Compact.

Anant has also been a Task Force member of the New Energy Architecture project run by the World Economic Forum.