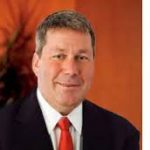 J. Michael Pearson is a Canadian American pharmaceutical company executive, who was the chairman and CEO of the publicly traded Laval-based Valeant Pharmaceuticals International, until he was replaced in April 2016 by Joseph C. Papa. On April 27, 2016 Pearson, Bill Ackman and Howard Schiller appeared before the United States Senate Special Committee on Aging to answer concerns about the repercussions for patients and the health care system faced with Valeant’s business model.

Before taking over as Valeant CEO in 2008, Pearson worked for them as outside consultant in 2007. In 2008, Pearson began implementing his strategy by selling off portions of Valeant’s European business to Meda AB, In 2010, Valeant and the Canadian-headquartered company Biovail agreed to merge, with the resulting company being called Valeant and being headquartered in Ontario Pearson was named CEO of the new company and then, in March 2011, he was appointed chairman of the board. The Biovail merger, by headquartering the company in Canada, allowed the company to reduce its tax rate to approximately 5%  Later, Valeant would be called upon to testify before Congress, along with Burger King, about how its tax inversion potentially gave it a competitive advantage over American companies. A New York Times article credits Pearson’s “tough tactics” for the financial success of the “fast-growing” Valeant Pharmaceuticals International. The article also highlights the criticism that Valeant Pharmaceuticals controversial strategy has attracted from patients finding themselves unable to afford drugs after price hikes by Valeant. This pricing controversy was originally raised when Senator Bernie Sanders and Representative Elijah Cummings sent a letter to Valeant seeking justification for huge price increases it took on two life-saving drugs, Nitropress and Isuprel. The company had raised the price of Isuprel by almost six times and the price of Nitropress by over three times. Shortly after, Democratic members of Congress attempted to subpoena Valeant for this information. As CEO, Pearson’s business strategy was to eliminate “risky and inefficient” Research and Development to the equivalent of “only 3 percent of its sales” whereas “traditional big drug companies spend 15 to 20 percent of sales on research and development”. Instead he acquired dozens of companies with existing drugs and saved money by laying off their employees. This model worked and Valeant’s stock price rose by over 1000%. By 2013, under Pearson’s tenure, Valeant was the largest pharmaceutical company in Canada. By 2015 Pearson had “nearly $3USD billion in stock and options” in Valeant, with “the potential to own hundreds of millions of dollars more.” Since Pearson became CEO Valeant shares “have returned more than 2,300 per cent” making Valeant the “most valuable” and the best performer on the Toronto Stock Exchange. By July 2015 Valeant’s market capitalization was $CDN 113-billion which is about $4-billion more than the Royal Bank of Canada. However, by October of that same year, following negative press about its pricing tactics and a particularly negative analyst report from Citron Research, Valeant’s stock dropped to approximately $CDN 78-billion.

In a conference call with Valeant investors on October 19, Pearson announced changes in Valeant’s business strategy. They will spend “more on research and development and less on acquisitions of smaller drug makers” and there will be “minimal price increases on its products” in 2016.

Pearson was hospitalized on December 25 and was treated for severe pneumonia. Valeant’s board created an office of the Chief Executive Officer to immediately take over his duties and a supporting committee to oversee the office of the CEO. The committee includes Robert Ingram, president of ValueAct Capital Mason Morfit and former Valeant CFO Howard Schiller. According to Reuters, following the announcement Valeant shares fell “10.5 percent to $102.14” on the New York Stock Exchange after its stock had already fallen more than 60 percent since August. Industry critics claim that since Valeant has suffered from credibility issues over the pricing controversy and is still not on solid ground, the company needs strong decisive leadership not a “cumbersome” committee.

On February 29, 2016, Pearson returned to the now controversial company. On March 15, shares in the company collapsed by 50 percent following a disastrous earnings call fronted by Pearson. On March 21, 2016 Valeant reported that CEO Pearson would be leaving the company, a decision reported by CNBC that “was not mutual”. The company also reported that former Chief Financial Officer Howard Schiller was to blame for “improper conduct” and requested he resign from the board of directors, which Mr. Schiller declined to do. “Circular Firing Squad Emerges” was how Piper Jaffray & Co analysts led by David Amsellem put it.

On April 13, 2016 it was announced that Pearson would be deposed from his position as CEO of Valeant on April 18, 2016. The removal was ordered by the Senate Special Committee on Aging who have been probing the soaring price of prescription drugs. Pearson initially fought the decision though Valeant’s board directed him to comply.

Valeant’s conversion to a Canadian company via the Valeant/Biovail merger in 2010 allowed the company to reduce its corporate tax rate to approximately 5%. Congress used Burger King and Valeant as examples of companies with tax advantages in a July 2015 investigation of corporate taxation. The investigation primarily focused on the advantage that foreign companies have in acquiring American companies due to their low tax rates  and members of Congress suggested that many of the deals by foreign companies, including Valeant, relied upon tax advantages to be completed. During the testimony, Valeant CFO Howard Schiller stated that “Valeant does not take into account tax synergies in either identifying or pricing potential acquisition targets”, but articles suggested this was in contrast to previous comments made by Pearson, including a comment made during Valeant’s pursuit of Allergan in a hostile takeover attempt when he was quoted as saying “no other potential acquirer of Allergan has the…tax synergies we have”.

When pharmaceutical pricing tactics became a topic for the press and politicians in 2015, Valeant’s price increase history became a major focus, with investigations revealing that the company had taken substantial price increases on many products from 2013 through 2015, including two products that it acquired and then raised the price on substantially. In response to inquiries about these price increases, Valeant’s company spokesperson said “Our duty is to our shareholders and to maximize value”. This sentiment was later echoed by Pearson, who said “My primary responsibility is to Valeant shareholders. We can do anything we want to do”.

Pearson agreed to appear before a Senate committee investigating the matter in April 2016.

Many have accused Pearson’s strategy at Valeant of being a roll-up dependent on acquisitions and aggressive accounting tactics while others claim it is not. As Valeant’s debt reached roughly $30 billion by 2016 concerns continued to be raised about accounting practices. Notable critics of Valeant and its accounting practices include Jim Chanos, who predicted the fall of Enron, Herb Greenberg, John Hempton, Charlie Munger, Jim Grant, AZ Value Investing  and Citron Research. Notable defenders of Valeant against these allegations include activist investors  Bill Ackman and Jeffrey Ubben. Valeant defended itself against these allegations in an SEC filing in October 2015.

Pearson was the highest paid CEO in Canada in 2015, receiving US$182.9 million during a period when Valeant’s share price fell by 30%.