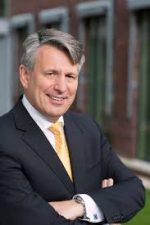 Ben van Beurden (born 23 April 1958) is the CEO of Royal Dutch Shell plc. Van Beurden joined Shell in 1983, after graduating with a Master’s Degree in Chemical Engineering from Delft University of Technology in the Netherlands.

Van Beurden’s career in Shell spans both Upstream and Downstream businesses. He has held a number of operational and commercial roles including those in Chemicals and LNG. In his 30 year career in Shell, van Beurden has worked in a number of geographies, from his native Netherlands, to Malaysia, United Kingdom and the United States. Before becoming the CEO of Shell, van Beurden was the Director of Shell’s Downstream business from January to September 2013. Prior to this, he was the Executive Vice President Chemicals from December 2006 based out of London, when he served on the boards of a number of leading industry associations, including the International Council of Chemical Associations and the European Chemical Industry Council. He has held a number of key roles in the group’s Upstream and Downstream businesses, including the post of Vice President Manufacturing Excellence from January 2005.

Lauded for his “deep knowledge of the industry and proven executive experience across a range of Shell businesses”, Van Beurden is credited with turning round Shell’s struggling chemicals division. From a loss making enterprise in 2008, the Chemicals business now contributes 5 percent of net earnings. He also worked for a third of his 30-year Shell career in its liquefied natural gas business, which has become a crucial driver of the group’s growth.

Born on 23 April 1958, Van Beurden is a Dutch citizen. With his wife Stacey, he has three daughters and a son. According to his official bio, he enjoys reading, running and travelling with his family.